Kylin instances are stateless, the runtime state is saved in its metadata store in HBase (specified by kylin.metadata.url in conf/kylin.properties). For load balance considerations it is recommended to run multiple Kylin instances sharing the same metadata store, thus they share the same state on table schemas, job status, Cube status, etc.

Each of the Kylin instance has a “kylin.server.mode” entry in conf/kylin.properties specifying the runtime mode, it has three options:

By default only one instance can run the job engine (“all” or “job” mode), the others should be in the “query” mode.

A typical scenario is depicted in the following chart: 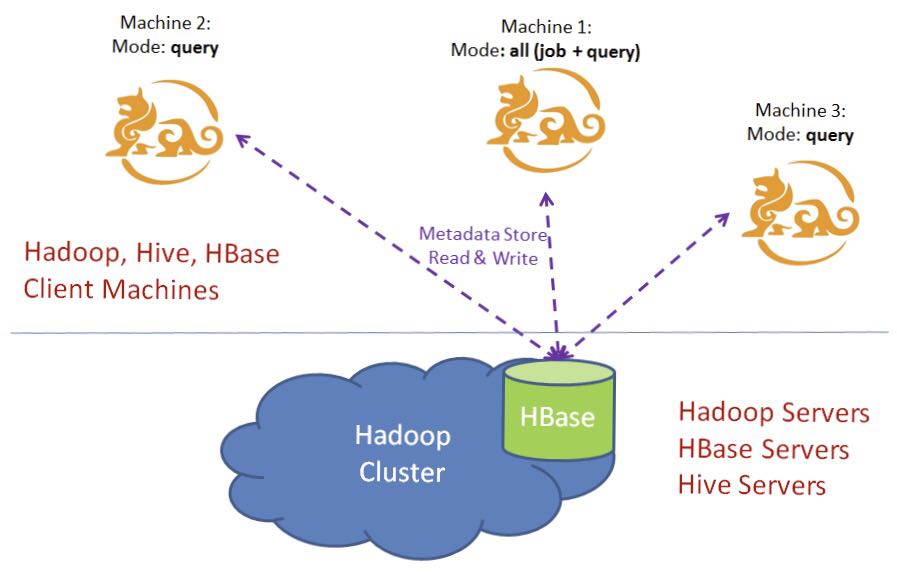 If you are running Kylin in a cluster where you have multiple Kylin server instances, please make sure you have the following property correctly configured in conf/kylin.properties for EVERY instance.

To enable Kylin service high availability, you need setup a load balancer in front of these servers, letting it routes the incoming requests to the cluster. Client side communicates with the load balancer, instead of with a specific Kylin instance. The setup of load balancer is out of the scope; you may select an implementation like Nginx, F5 or cloud LB service.

Kylin can work with two clusters to gain better stability and performance:

This deployment has been adopted and verified by many large companies. It is the best solution for production deployment as we know. For how to do this, please refer to Deploy Apache Kylin with Standalone HBase Cluster