At the beginning of Apache Kylin, the main purpose was to solve the need for interactive data analysis on massive data. The data source mainly comes from the data warehouse (Hive), and the data is mostly historical rather than real-time. Streaming data processing is an brand-new field of big data development that requires data to be queried as soon as it enters the system(second latency). Until now (the latest release of v2.6), Apache Kylin’s main capabilities are still in the field of historical data analysis, even the NRT(Near real-time streaming) feature was introduced in v1.6, there are still several minutes of delay, it is difficult to meet real-time query requirements.

To keep up with the trend of big data development, eBay’s Kylin development team (allenma, mingmwang, sanjulian, wangshisan, etc.) Based on Kylin, the Real-time OLAP feature was developed to implement Kylin’s real-time query of Kafka streaming data. This feature has been used in eBay in production env and has been running stably for more than one year. It was contributed to community in the December of 2018.

Part-I. What is Real-time OLAP for Kylin

There are various types of data sources in the company, including mobile devices such as servers and mobile phones, and IoT devices. Messages from different sources are often distinguished by different topic and aggregated into a message queue (Message Queue/Message Bus) for data analysis. Traditional data analysis tools use batch tools such as MapReduce for data analysis, which has large data delays, typically hours to days. As you can see from the figure below, the main data latency comes from two processes: extracting from the message queue through the ETL process to the data warehouse, and extracting data from the data warehouse for precomputation to save the results as cube data. Since both of these parts are calculated using batch-compute programs, the calculation take a long time , which make real-time query difficult to achieve. We think to solve the problem, we need to bypass these processes, by building a bridge between data collection and OLAP platforms. Let the data go directly to the OLAP platform.

There are already some mature real-time OLAP solutions, such as Druid, that provide lower data latency by combining query results in real-time and historical parts. Kylin has reached a certain level in analyzing massive historical data. In order to take a step toward real-time OLAP, Kylin developers have developed Real-time OLAP.

At the same time, the real-time node will continuously upload the local data to the HDFS. When a certain condition is met, the segment will be built by MapReduce, thereby realizing the conversion of the real-time part to the historical part, and achieving the purpose of reducing the pressure of the real-time computing node. 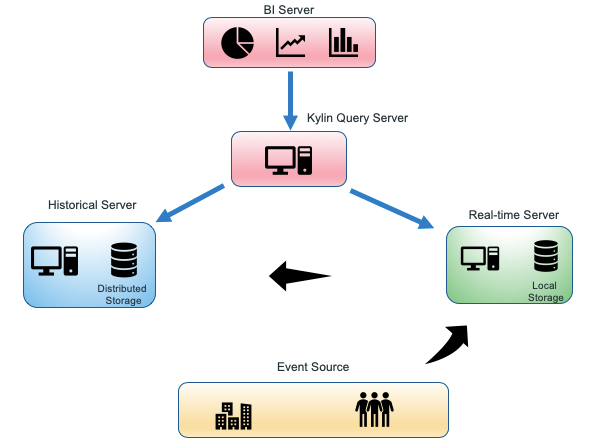 1.3 Concepts and roles of Real-time OLAP

To implement Real-time OLAP, Kylin introduces some new concepts, and here is a preliminary introduction.

In terms of data flow, we can see that the flow of data is from Kafka to Receiver, then Receiver uploads to HDFS, and finally MapReduce program merges and reprocesses Segment into HBase.

On the query side, the query request is issued by the Query Server, and the request is distributed to both the Receiver and the HBase Region Server based on the time partition column appearing in query.

The assignment of Topic Partition and Rebalance, Segment state management, and job submission are the responsibility of the Coordinator. 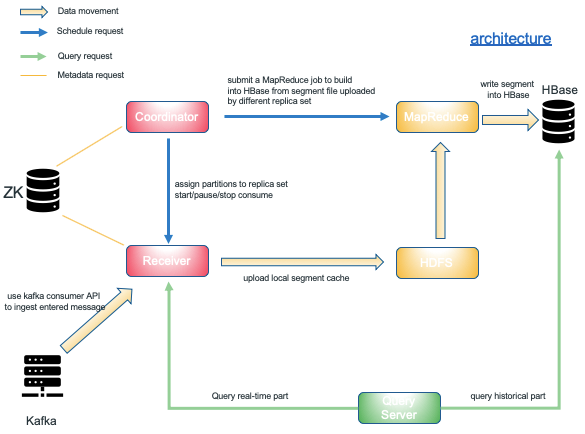 The Segment data on the Receiver side consists of two parts: MemoryStore and Fragment File. Inside the MemoryStore, the aggregated data is stored using Map<String[], MeasureAggregator[]>>, where key is an array of strings of dimension values ​​and value is MeasureAggregator array.

As Receiver keeps ingesting messages, when the number of data rows in the MemoryStore reaches threshold (kylin.stream.index.maxrows), a flush will be triggered. The Receiver will flush the entire MemoryStore to disk and form a Fragment File. To read Fragment File, Receiver uses memory-mapped file to speed up the reading. Please refer to source code. In addition, Fragment File uses a variety of methods to optimize scanning and filtering performance, including:

Real-time OLAP adds some new metadata to Kylin, such as cluster management / topic partition assignment. These data which are currently stored in ZooKeeper (Currently we think streaming metadata are volatile so we didn’t provided method to backup these metadata), including:

1.8 State of Streaming Segment and its Conversion

We can express the state transition process of the Segment as the following figure. There are four FIFO queues from left to right. The members of the queue are Segments. Each Segment will go from left to right to the next queue. The queues are 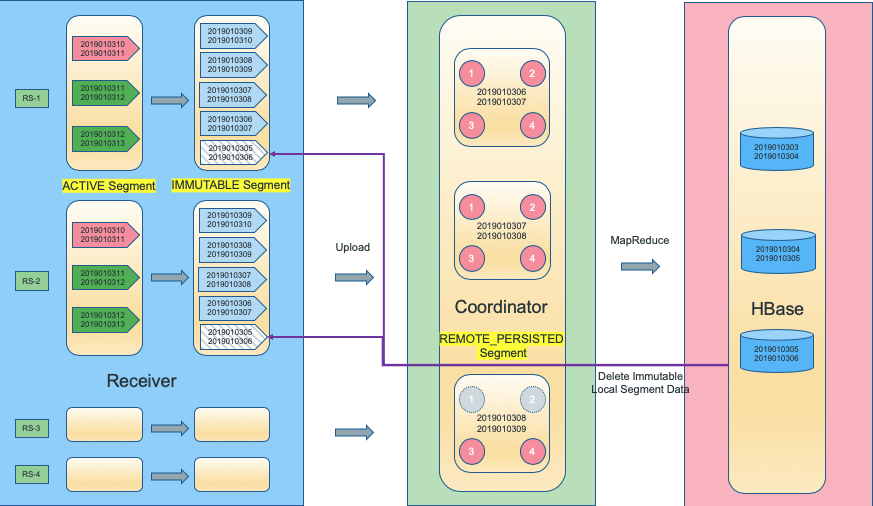 The segments in the Active queue and Immutable queue are controlled by Receiver, the icon of Segment is a pentagon. Each pentagon represents part of the Segment data, because a Replica Set is usually only responsible for a part of the partition of Kafka topic. Conversions from Active to Immutable are controlled by Segment Duration and Segment Window.

RemotePersisted segment queue is managed by the Coordinator. The segment icon is a rounded square. Each red circle inside indicates that one Replica Set has uploaded the Segment data file to HDFS. Each gray circle indicates one Replica Set has not completed the segment data upload. So, a rounded square with some gray circle indicates that the Segment cannot be built because the data on HDFS is not complete(data from some partitions are not uploaded).

When all the data files of a Segment (from all Replica Set) have been uploaded, the Segment build job(Mapreduce) is ready to triggered, Coordinator will be submit MR job to Resource Manager.

Once the MR job is finished and the Segment successfully enters HBase, the Coordinator notifies the relevant Receiver to delete the local data(local segment cache), and clears the data stored in the HDFS, set the status of the HBase Segment to READY.

Depending on the value of the Retention Policy, when set to Full Build, the Immutable segment will be uploaded to HDFS. When all Replica Sets are uploaded, the Coordinator will build cube and convert the segment cache uploaded to HDFS to HFile by MapReduce.

When Retention Policy set to Purge, the local segment will be deleted periodically, without uploading and building actions.

Receiver under the same Replica Set may have inconsistent ingest rate. In order to avoid inconsistent query results, for one cube, a fixed Receiver will used to answer query request as much as possible. Unless the preferred Receiver is inaccessible, other Receivers will be queried.

In order to cope with the rapid increase of Kafka’s message volume, or in other case the Receiver need to go offline, the assignment of Replica Set and the Kafka topic need to be re-adjusted, to make the entire Receiver cluster in a load-balanced state. For such reason, you need the Reassign action.

By the Reassign action, Kylin will stop the ingest/consume of the Receiver that belongs to replica set which need to be removed, and hand over kafka partition that it was responsible formerly to the new Replica Set. This process is done by the Coordinator and the process does not require data movement. The time consuming of the whole process depends on the number of nodes involved in Reassign, which is usually completed in a few seconds.

It should be noted that the Receiver which was removed must not be killed immediately after Reassign action completed. The reason is the data cannot be guaranteed to uploaded to HDFS successfully, and the removed Replica Set is also required for query request.

Reassign is a process from CurrentAssignment to NewAssignment. The entire Reassign action is a distributed transaction, which can be divided into four steps. If one step fails, the automatic rollback operation will be performed.

If a Replica Set does not change the assignment during the Reassign action, all steps are skipped.

Reassign action will add Removed Replica Set to NewAssignment, but list of partition is empty(see code below).

When the Segments of the removed Replica Set are all uploaded to HDFS and finished building into HBase, the Assignment of these empty partition list will be cleared.

As shown in the figure below, before the Reassign action occurred, the cube was consumed by three Replica Sets, namely RS-0, RS-2, and RS-3(says every replica set has two nodes), and the consumption pressure of each Replica Set was uneven. 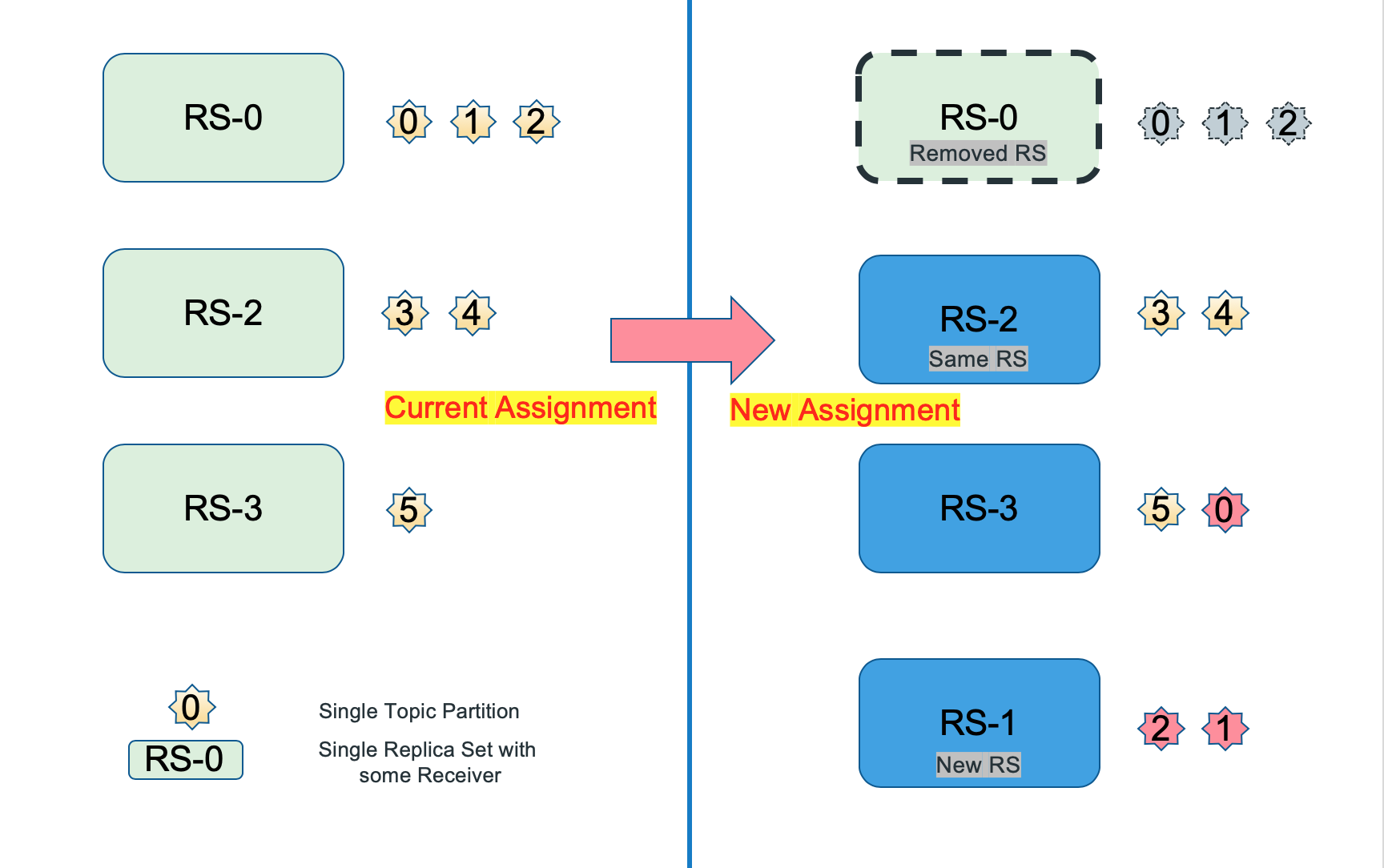 Specific steps are as follows

Before the Removed RS completes the upload and the relevant Segment is successfully built into HBase, the query request is sent to RS-0 to RS-3.

For a more detailed description, read the code source code