This article is the first post of a series document that introducing the fast cubing algorithm in Apache Kylin; The new algorithm will be released in the future release; Now it is under internal testing and pilot; All the source code has been published in Kylin’s Git repository https://github.com/apache/kylin/ on 0.8 branch.

Before introduce the fast cubing, I’d like to make a brief introduction on the as-is cubing algorithm, which is called “by layer cubing”;

As its name indicates, a full cube is calculated by layer: N-dimension, N-1 dimension, N-2 dimension, … until 0 dimension; Each layer’s calculation is based on its parent layer (except the first, which base on source data); So this algorithm need N rounds of MapReduce running in sequence;

The reducer gets the values grouped by key; it aggregates the measures, and then output to HDFS; one layer’s MR is finished;

When all layers are finished, the cube is calculated; 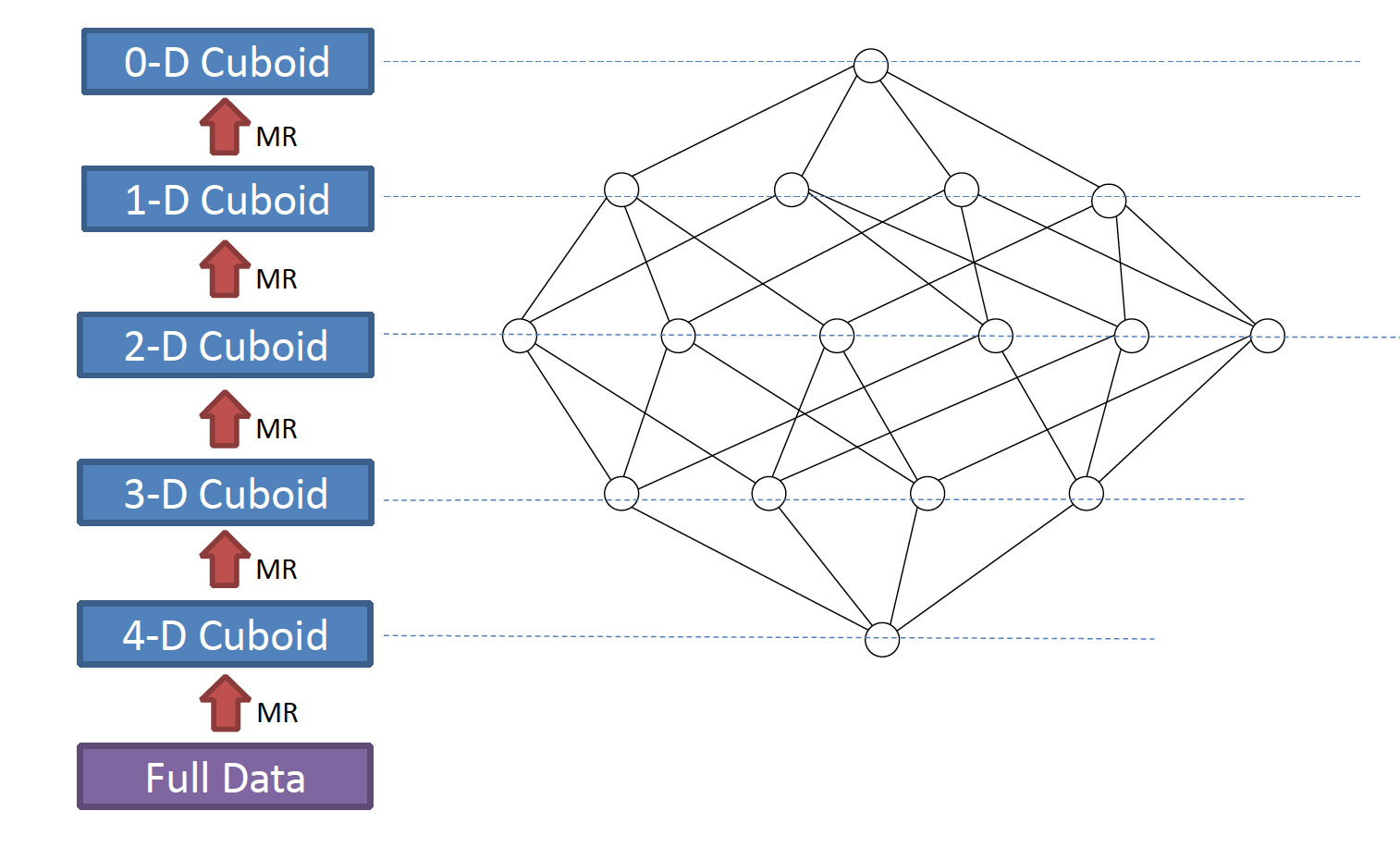 The fast cubing algorithm is also called “by segment cubing”; The core idea is, each mapper calculates the feed data block into a small cube segment (with all cuboids), and then output all key/values to reducer; The reducer aggregates them into one big cube segment, finishing the cubing; Figure 2 illustrates the flow; 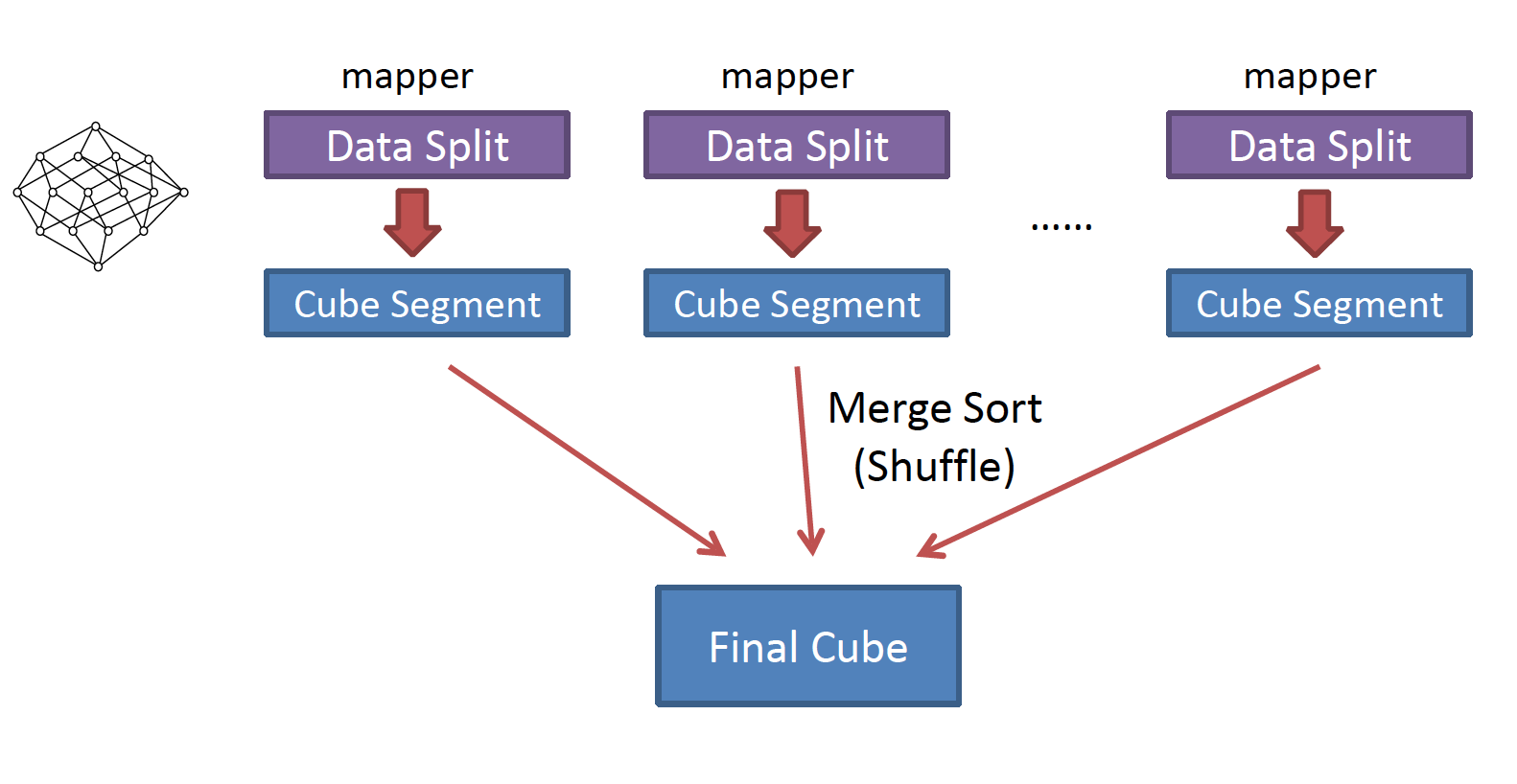 Compared with the origin algorithm, the fast cubing has two main differences:

Let take an example: a cube has 4 dimensions: A, B, C, D; Each mapper has 1 million source records to process; The column cardinality in the mapper is Car(A), Car(B), Car(C) and Car(D);

Totally, assume the average cardinality of the dimensions is Card(N), the records that written from mapper to reducer can be reduced to 1/Card(N) of origin size; The less output to Hadoop, the less I/O and computing, the better performance.

Let’s look at the figure 3, which is a full spanning tree of a 4-dimension cube: before 0-Dimenson cuboid “*” be aggregated, cuboid “ABCD”, “BCD”, “CD” and “D” will be cached in memory; As “*” has no child, it will be outputted once be calculated, then comes “D”; After “C” be outputted, “CD” will be outputted as all of its children has finished; The memory for a cuboid can be released once it be outputted; The base cuboid ABCD will be the last one to output. 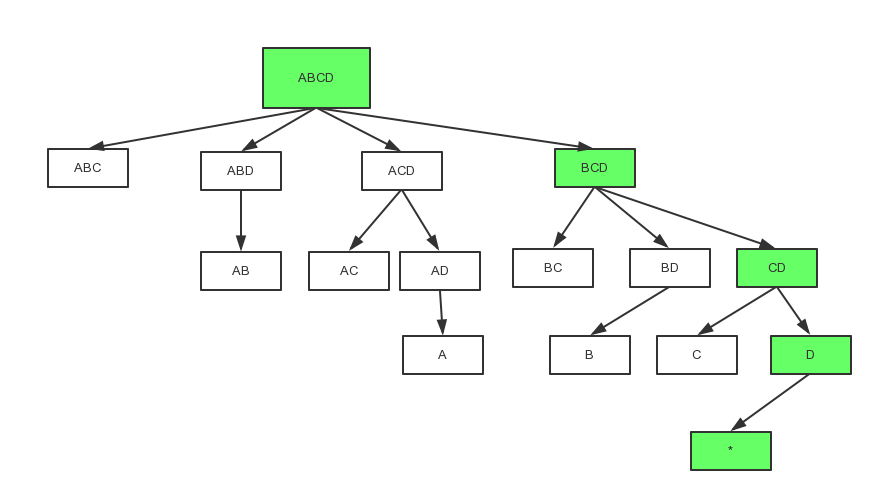 With the DFS visiting order, the output from a mapper is fully sorted (except some special cases), as the cuboid ID is at the beginning position of row key, and inner a cuboid the rows are already sorted:

Since the outputs from mapper are already sorted, Hadoop’s sort would be more efficient;

Besides, mapper’s pre-aggregation happens in memory, this avoids unnecessary disk and network I/O, and the overhead to Hadoop is reduced;

We realized that Kylin couldn’t assume the mappers always have enough memory; The cubing algorithm need be self-adapting to various situations; A lot of efforts were put on optimizing the memory use and spilling data to disk when proactively detects an OutOfMemory error; The result is promising, the OOM error is rare to occur now;

Here let’s do a summary on the fast cubing algorithm;

Other Enhancements in Fast Cubing

Together with the fast cubing algorithm, we also introduced several other enhancements in the cube build flow, like estimating the region splits by sampling, directly outputting HFile, and merging Cube over HBase Table, etc; I’d like to elaborate in the next articles, please keep posted here; If you have interest on Apache Kylin, welcome to visit our home page http://kylin.apache.org/ and subscribe our development mailing list at dev-subscribe@kylin.apache.org